Spring is upon us again, with thoughts of flowers and gardens shooting up.

Love of houseplants is universal, except if you have a nomadic lifestyle, I suppose.

Most residences and offices have some kinds of plants, at least some plain-Jane pothos or bashful peace lilies.

“Oh yes! It’s necessary for me to have plants,” a fellow expat called Diane told me. I, too, couldn’t imagine my life here without them; else I would feel I would just be slumming it in a hotel-like setting instead of my home, which is in a hutong house. My friends and coworkers also enjoy having plants with some occasionally posting photos of their vegetable gardens or cacti on Wechat; a Chinese coworker told me he had two plants, and when he was away on vacation, he said he “hope[d] they live well in Beijing.”

Plants not only beautify the environment  – they also offer wonderful entertainment (Lillian Gish films aside, the best silent movies ever if you watch them unfurl their leaves or poke their green little noses out of the soil!) . Plants are morale boosters, works of art, scientific experiments, a practice in patience, and have a meditative quality. They can nourish the soul, but cause headache or heartache if you forget to water or take care of them, if they have pests or rot – or if they downright die on you. 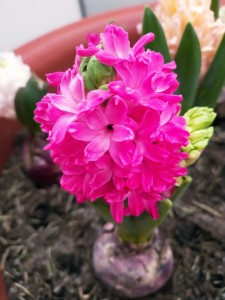 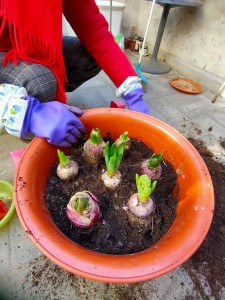 Historically plants and their cultivation are interesting; to me, COVID-19 recently brought to mind the popularity of victory gardens, which were kitchen gardens planted by individual gardeners to relieve pressure on the public food supply during WWI and II, with some people recently coming up with the idea of COVID Victory Gardens, which I found advertised somewhere as being the most “valuable commodity these days: escape.” In pre-COVID times, former First Lady Michelle Obama planted a White House kitchen garden to promote healthy eating and wellbeing, and container gardens seem to be flourishing these days among urbanites, also in Beijing. 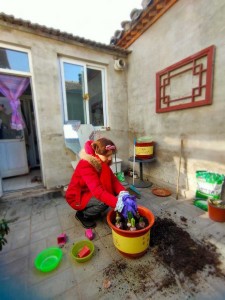 Container gardens can also be a messy affair

I, too, tried my hand at planting a sort of “coronavirus container victory garden” in the courtyard of my little hutong house. I planted corn, eggplant, tomato, and pumpkin, but they yielded no harvest except for some green shoots and stalks. However, my tomato plant produced a tiny green orb that looked like a martini olive and then just withered on the vine after I had to take the plant inside to protect it from frost. My mistake? I suspect planting the seeds too late, which in my case was May. “Definitely (plant in) late March if I remember correctly, but seeds can be started indoors if you want to get a jump on things,” Terry, a fellow American expat who was successful with his eggplant and rosemary advised me.

I also got gardening advice from the woman who works at a local kiosk where I buy water and snacks as she has a small gardening plot with rose bushes. What’s more, I watched what my Chinese neighbors were doing, for example, one neighbor wrapped her outdoor plants in plastic in the winter to protect them from frost, and I would stealthily eye one neighbor’s beautiful collection of plants on his front stoop, studying them to see which plant varieties he had chosen and how he was caring for them, as I was not sure what worked in Beijing’s hot summers and cold, dry winters. I was banking on “success by imitation,” the easiest, laziest, least noble method.

Another aspect I love about having plants is not only researching how to take care of them, but also learning more about the symbolic significance of plants in various cultures. For example, the orchid, bamboo, chrysanthemum and plum blossom are known as the “Four Gentlemen” (四君子), or the “Four Noble Ones” in China because they represent different virtues (and seasons): the wild orchid is associated with spring, grace and beauty, which are traditionally “feminine” virtues, whereas bamboo represents summer, tenacity and uprightness – conventionally “male” virtues. The chrysanthemum, a flower popular at Chinese funerals and graves and a no-no at local weddings, represents hardiness and autumn, whereas the blood-colored plum blossom is associated with winter and overcoming adversity because it blooms in the bitter cold. They are perennial classical art motifs (I even have the four plants featured on a qipao of mine) found on paintings and wood carvings.

The flowering crabapple which I bought on Taobao, meanwhile, reminds me of the classic novel Dream of the Red Chamber, which features a botanical smorgasbord where each plant is doubtlessly associated with a deeper meaning. When I posted a photo on Wechat of my tiny crabapple tree, which has a bonsai-like quality – I associate hardy crabapple trees with Beijing courtyards because for some reason they appear to be a staple of 故居, or former residences of famous persons – someone suggested that Guanyin Pusa might be protecting it as it was growing in front of two pictures of the Buddhist deity! 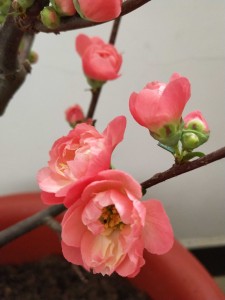 As I sit on several orchids, cacti, tea rose bushes, wilted hyacinths and new packets of vegetable seeds which are waiting for their little soil nests, I am excited what 2021 will bring for me in terms of green surprises!