This story was originally published in HaiVision magazine (September 2020)

When Helen Boyle came to Beijing in 2008 for a one-year sabbatical to visit her daughter who was living in Beijing, little did she know that this decision would significantly change her life and that of many others – for the better!

Helen, a British expat, shared some thoughts via email from her native UK about a China-based foundation that she had created. The novel coronavirus outbreak had caught her off guard while she was abroad, as was the case for some foreigners, but she was eager to return to China and resume her work there once the situation returns to normal.

“Having been in education for over 20 years in the UK, I was in Beijing initially for a one-year sabbatical comparing Chinese and UK teaching methods and I came across a migrant school in the north of Beijing,” Helen remembered.

“Seeing the condition of the classrooms in this school in terms of resources, lack of qualified teachers and the school’s environment for the children, I felt that I would like to use my knowledge and experience to make a difference. The things that fascinated me with regard to the school’s children were the enthusiasm and the energy the children displayed. ”

Eventually, Helen decided to resign from her lecturing post back in London and remain in Beijing to help this migrant school. Next to the first school Helen was helping out at, other schools started to request help, which led to people offering their experience to assist these different schools in various ways.

And so the Migrant Children’s Foundation (MCF) was born to assist disadvantaged children of Chinese migrant workers who don’t enjoy the same access to social services in Beijing such as schooling and health care as their local peers do because migrants don’t have Beijing residence permits.

“As there appeared to be a need for this service, I felt it appropriate to start a Foundation and had it registered officially in the UK,” Helen said. While MCF is a registered UK charity, in China, it operates as a non-profit social enterprise.

Committed to making a difference

When asked how her foundation helps migrant children in Beijing, Helen explained that MCF provides extra-curricular and cultural activities in subjects that migrant children wouldn’t have access to otherwise.

“Other than being given cultural lessons from native English speakers, the subjects covered range from science, photography, drama, music, horticulture, to name but a few. It is worth noting that these activities are of the highest standard, so much so that the children being given chemistry lessons in one of the migrant schools won a national competition,” she said.

“It goes without saying that without these resources, both professional and practical, none of this would have been possible, and all of this has been provided by a dedicated body of people who are committed to ‘making a difference.’”

Helen’s vision for the foundation is to expand the work that is being carried out into rural areas where the MCF can bring about a change for the better.  “As in all new ventures, there will be a learning curve which will require patience and resources to make a positive impact on the needs of the school children in the areas we would like to support,” she said.

Looking back, Helen has experienced many rewarding moments thanks to her foundation. One case in particular stands out, and that is the developing story of a boy with cerebral palsy called Hu Yi Fan (nickname: Fan Fan), whom she first met five years ago.

“While visiting one of the MCF-sponsored schools, I first noticed this young boy was being carried by his mother. Upon finding out that Hu Yi Fan had an ailment, after talking to his mother, I organized a consultation at the Beijing United Hospital and Hu Yi Fan underwent preliminary tests to determine the extent of his ailment,” Helen recalled.

“After a small amount of playful attention while waiting to be seen by the doctor, little Hu Yi Fan came out of his shell and [broke out] into mirthful laughter and delight, captivating the hearts of all concerned,” Helen said.

Subsequently, Hu Yi Fan returned to the hospital to undergo an MRI brain scan. The result showed the extent of the boy’s cerebral palsy and it was found that he also had epilepsy. After the diagnosis, he began therapy sessions.

Thanks to MCF, “he has undergone treatment to improve his rehabilitation which included physiotherapy, aqua therapy, speech therapy and he is now receiving horse riding lessons to improve his synchronization,” Helen said.

These therapies combined have afforded Hu Yi Fan, or Fan Fan, as Helen occasionally referred to him, a greater quality of life. “When MCF first met the five-year old, he was being carried by his mother, who was his only mode of transport. Now, he can stand on his own and is excitingly trying to walk with the aid of specially created walking shoes that provide his body support,” the founder and director of MCF said. 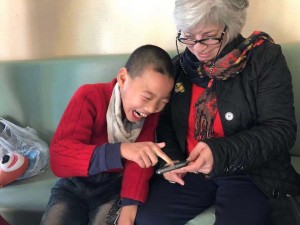 Success stories like these have also been made possible thanks to numerous organizations in China that have contributed to the work of MCF, including embassies, international schools, corporations and individuals, Helen shared.

A highlight for Helen was being recognized for her work by the British Queen and she was awarded the Order of the British Empire (OBE), an award given to UK nationals, and occasionally non-UK nationals who have made outstanding achievements in the arts, sciences, public services or charitable efforts.

Tony Boyle, Helen’s husband, is understandably proud of his wife’s achievements. I had met Tony at an event and it was he who first mentioned Helen and her foundation to me, and established contact between us.

“As a member of the family that has such an amazing person at the heart of it, just like to say this honor has been bestowed upon her for giving to others in the same way as she gives to us – selflessly and completely,” Tony posted on his Wechat moments after his wife was awarded the OBE at the end of December 2019.

“Inspire and be inspired”

The motto Helen chose for MCF is “inspire and be inspired.”

“One of my beliefs is that individuals receive a great deal of satisfaction from the simple act of giving, regardless of what it is that they are passing on. In this instance, it is a case of people coming together to pass on their time, knowledge and professionalism selflessly to children with limited educational resources,” she said.

“This said, the satisfaction they receive because of this giving is self-motivating in itself. Hence, the idea of not only do you inspire with your contribution but you receive inspiration from what you have given.” 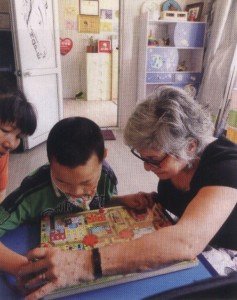