When news broke of a mysterious virus causing respiratory illness said to have originated in Wuhan, I was about to enjoy several days off due to the Spring Festival holiday at home in Beijing. I vaguely remember Beijing having only two cases at the time. I was chatting with a Chinese coworker, deliberating whether I should return the movie tickets for the Spring Festival blockbusters my boyfriend and I had booked online.

“Nature has turned against us,” a Chinese coworker observed. I wasn’t so sure about that. “Nature is not for or against… it just is,” I mused. While nature I believed was ambivalent, I would discover that people’s attitudes towards the virus it had produced definitely weren’t!

There were bags of face masks stashed on an office desk and some coworkers were helping themselves. Some of my coworkers were already wearing masks in the office, and there was a sense of nervousness and hush. No one encouraged me to take any masks; but in retrospect, I think I should have been more proactive and asked to help myself. However, a Chinese coworker kindly offered me some from her bag, and I gratefully accepted.

Little did I know how valuable these face masks would be to me and my boyfriend Jackie in the coming weeks, as people made a run for the pharmacies to stock up on them. (Note: the usefulness of face masks in preventing the spread of the new virus, dubbed novel coronavirus, is controversial, but in China they are widely believed to be effective. Another issue is what types of masks work.) When I visited a pharmacy and convenience store, they were sold out and had no idea when new stock would come in. Searching for masks would become somewhat of a search for the Holy Grail for us in China.

Poster showing measures how to protect oneself from COVID-19

“Good afternoon my foreign friend… be a bit careful these days,” a Wechat message from a Chinese acquaintance read several days later. It was a security guard at my local Yonghegong subway station whom I was friendly with, and whenever I met her in the subway station, we would wave to each other. She would later ask me by text whether I knew where to buy masks – maybe she thought I had connections abroad? – but I was sorry to tell her I couldn’t help. I was relieved to see, however, that she later found a rather high-tech mask which she wore while working in the subway.

Things started to get bizarre as the virus spread during the Spring Festival. It turned out I didn’t have to worry about going to the movies as the theaters were promptly closed, as well as the Yonghegong Temple across the street, which attracts thousands on the first day of the lunar new year. Temple fairs were canceled.  My boyfriend and I spent the Spring Festival hunkered down in our hutong house, living off the food we had stockpiled for the festival, watching movies, and holding our breath with the rest of China.

Entrance to a hutong house in the Guozijian neighborhood, with poster of anti-COVID-19 measures on the walls

At the end of January, the U.S. embassy issued a level-four travel advisory for China, warning Americans not to travel to the country, and Americans in Wuhan were subsequently ferried out on evacuation flights, as were nationals of other countries. China’s neighbors started to close their borders. Flights out of China were starting to be suspended, and my mother asked me whether my boyfriend and I wanted to come spend several months with her in the U.S. until the virus had disappeared.

My gut reaction was to take her up on this offer, but the logistics of it were complicated. My boyfriend, who is Chinese, was highly unlikely to get a visa on such short notice, or at all under these circumstances. So I made the choice of riding out the epidemic with my boyfriend here in Beijing; after all, he wasn’t from Beijing, and leaving him stranded alone under these circumstances was not an option for me. “Thank you for sticking things out with me, I am very moved,”  Jackie told me one morning, with tears in his eyes.

I read an article in the Beijinger magazine that stated that as of February 9, 70 percent of foreigners in Beijing chose to stay, either out of conviction that things would look up soon or because they simply couldn’t leave for various reasons. Some however did push the panic button and left, for example, I had an American acquaintance who scrambled to get on a flight back home because his mother was seriously ill and he didn’t know whether he would be able to see her again in the next couple of months. Upon landing, he put himself under a quarantine. 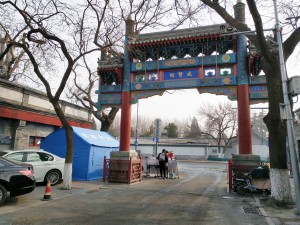 My Chinese and foreign coworkers became part of a successful “work from home experiment” that has been encouraged throughout China during the epidemic. I edited news stories from my home computer and communicated with my coworkers in a Wechat group of over forty people. Every day, I also sent a Wechat message to my office saying I was in good health. I felt very fortunate that I was not temporarily out of work like many others and that my employer was acting in a morally and socially responsible way by having us work from home to avoid the risk of infection.

Part of my job was keeping up with the news cycle. Every morning when I woke up, the latest numbers of infected and deceased flashed across my phone, and the media reports coming out of Wuhan and Hubei at large were harrowing. Especially poignant were the stories of healthcare workers infected in the line of duty, e.g. a 29-year-old doctor who was engaged to be married and died from COVID-19, the disease caused by the novel coronavirus. When my boyfriend and I were first exposed to such stories, we were shell-shocked as they were taking place not too far away, but gradually became used to the “new normal” of living in the midst of an epidemic.

Guozijian Community Center with a banner next to the entrance urging residents to wear face masks, wash hands, air out and avoid gatherings

Misinformation and conflicting reports were rampant, and like many, I did not know whom to believe and which clickbait article to read next. Common sense was our best friend – practicing good hygiene, such as washing one’s hands, avoiding mass gatherings, trying to stay at home and sustaining one’s physical and mental health. Not giving in to irrational fear and hysteria but remaining vigilant. A sense of routine and interacting with others as part of the infinitely large cyberspace community also helped.

Compared to those in Hubei Province, we in Beijing have been very fortunate – we had access to goods we needed, could leave our apartments, move relatively freely, and could still run errands. However, everyday errands, like shopping or going to the ATM were fraught with complication – we had to pass through fever checks and barricades to get out of our buildings or hutongs, and show residence cards that our community center issued to us, and I was now nervous about the germs on the ATM keypad so I used a pen to put in my pass code.

Non-essential doctor’s and dentist visits were indefinitely postponed, as well as appointments with the hairdresser. I saw an elderly man on the street walking his poodle, which was also wearing a mask, a protective outfit and little slippers as there was uncertainty whether pets could also contract the virus. 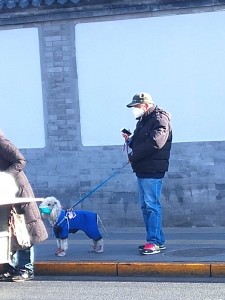 A man walks his dog, which is also wearing a face mask, near the Yonghegong Lama Temple

Activities at home included emailing concerned friends abroad and assuring them of our safety, checking in with local friends, reading and writing, exercising in our small private courtyard, and engaging in home improvement.

We also interacted with my boyfriend’s family back in the Xi’an area as well as Chinese and foreign friends via Wechat. Not surprisingly, our bonds grew stronger during this difficult time. These are some of their reactions to the crisis.

When I called to check in on my Chinese landlord, who was in his 70′s, his voice was laced with fear. “Don’t go out,” he advised me. “Not now.”

One African friend who was a father to two teenage boys texted me: “Boys are stressed with staying at home and doing homework all day. I do not know how to cheer them up. They played all computer games and got tired of them.” He observed that one of his boys started to laugh hysterically after napping.

A Brazilian friend who lived alone was frustrated because the gym was closed, and he enjoyed socializing there. Even though he could work from home, he preferred going to the office and wearing a mask although it was hard to breathe in them long term. He was confident that the situation would soon return to normal. “We need to cling to that, otherwise we get crazy,” he said.

“We know nothing really about the virus,” an American friend who had lived in China for decades told me. He had been here during the SARS epidemic and was trying to power through this one by working on his creative projects. “True,” I thought. “But we know our own reality.” And this was it.

What was greatly concerning was that not only Chinese people around the world, but also foreigners associated with China were being stigmatized because of the virus. One acquaintance from Romania who was still in China and produced content for a local media outlet posted on Wechat that she had become the victim of online abuse from her country fellows by virtue of her relations with China, which she found distressing and demoralizing. I urged her to “ignore the bad and focus on the good,” but that was certainly easier said than done!

While the outbreak brought out the worst in people, it could bring out the best. Although I felt helpless and frustrated that there wasn’t a lot I could personally do to help, I was touched by the many people, Chinese and foreign, who had expressed their concern for us, and I tried to do my modest part to help boost morale. Here are two examples.

I have a young coworker who was originally from Wuhan, Hubei, the epicenter of the outbreak, and I made a point of checking in on him via Wechat several times to see how his family were doing back in Hubei. He said his family were safe, but isolated at home. He had spent the Spring Festival alone in Beijing because the virus had “killed” his travel plans of going home.

Similarly, I  tried to encourage a Chinese friend whose English name was Anna and who was under indefinite lockdown in the city of Yichang, Hubei. I was impressed by how stoic and appreciative she was. Anna told me that she bought a small piece of meat for  a whopping RMB 190 (about 27 U.S. dollars/21 GBP) but was understanding because the drivers’ efforts to deliver goods to the city posed a health risk for them. When the drivers return from their run, she said, they would have to be quarantined for 14 days.

Without a question, it must be psychologically hard not to be able to leave one’s apartment except maybe once or twice a week to buy a limited selection of groceries at inflated prices. Still, for Anna and many of us in China, optimism prevailed. “With your encouragement, everything will be fine, you guys also take care of your health, we can do it together,” Anna texted me.