BEIJING, Oct.  9  (Xinhua) –  To many past and present, the Chinese city of Shanghai has been a center for business and trade, marked by its forward-thinking residents, international flair and openness to the world.

To 20,000 European Jewish refugees during World War II, it was a last refuge from Nazi persecution and anti-Semitism that would ultimately claim the lives of millions. In 1940, John (formerly Hans) Less was one of the German Jewish refugees who as a teenager ultimately found a fortuitous last refuge in Shanghai after a three-week overland journey.

Self-portrait of John (Hans) Less. The watercolor is signed “Hans Less” and dated “Febr. 1940.” He was 16 years old at this point, half a year before he left Berlin for Shanghai. Private collection of Dr. Steven Less.

Today, his son Dr. Steven Less has devoted himself to preserving his father’s legacy and that of the other Jewish refugees with a project, comprised of an ongoing exhibit called “Last Refuge: Shanghai” in the Shanghai Jewish Refugees Museum which shows artifacts that belonged to Less’ father.

The project, rather unusually, also included a field trip of German high school students from the International Comprehensive School Heidelberg to Shanghai in September on which Less also went along to confront his father’s past. The students will report on their field trip experiences at a public event in Heidelberg, Germany in December.

John Less was a graphic designer who bequeathed his artworks, photos and private documentation of his Shanghai years to his son, who in turn created a digital catalog of them. 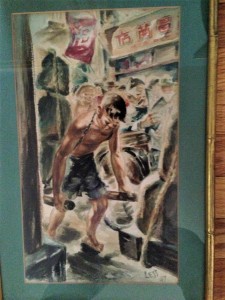 Watercolor showing a busy street-scene which includes a coolie pulling a heavy load. It was drawn in Shanghai by John (Hans) Less and is dated 1947. Private collection of Dr. Steven Less.

“Before he passed away in 2011, my father expressed his wish to have his historical records preserved, preferably in a museum… I understood the charge on a more abstract level and in a less urgent way, ” Less told Xinhua in a recent interview. “To my mind, my father ultimately wanted to have his story told in a broader context and communicated to future generations.”

Less was in a sense destined to take on this task. “My father long saw me as the family’s historian. I always pressed him to reveal more of his story, focused academically on history as my major field of study in college, learned German and was, until having children of my own, the last one in the family who could decipher his and my grandfather’s German documents,” he said. Less regards preserving his father’s legacy publicly as his personal attempt to fulfill his filial duty, or “honor the unwritten covenant I had with my father.”

Less, who identifies himself as an American with German-Jewish roots, now calls the city of Heidelberg, Germany his home. He obtained a doctorate in law from the University of Heidelberg, and worked until recently as a senior research fellow at the Max-Planck Institute for Comparative Public Law and International Law and continues to teach as an adjunct law lecturer.

He became aware of the “Last Refuge” project after he saw a local paper featuring a photo of his daughter attending a lecture at her high school by a woman called Sonja Muehlberger.

Muehlberger had been born in Shanghai to German-Jewish refugee parents and is one of the last of the surviving former refugees. She recently received the Federal Order of Merit at Germany’s Shanghai Consulate General for her efforts to preserve the history of the Shanghai Jewish refugees.

Upon this discovery, Less initiated contact with the initiator and organizer of the project, Dr. Peter Blum, head of the Heidelberg Municipal Archives, and both started collaborating after realizing that their goals coincided. 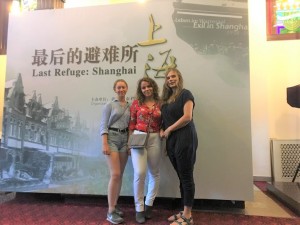 “We wanted to draw attention to a chapter of German-Jewish-Chinese history that is not that well known in Germany,” Blum told Xinhua. “A historical chapter that inspires courage! One that makes it clear that there was no anti-Semitism at all among the Chinese population back then, despite the trying political and economic circumstances!”

Blum said that funding for the exhibit and the German high schoolers’ field trip was a challenge. However, he said the project was able to be realized thanks to generous support from both German and Chinese institutions — the Confucius Institute in Heidelberg and its German director, Petra Thiel, the Chinese Consul General in Frankfurt Sun Congbin, the German Consul General in Shanghai Dr. Christine Althauser, the Shanghai Jewish Refugees Museum, Xu Weiwan and  her colleague Wang Yanting of the Shanghai Municipal Archives, as well as the Volksbank Kurpfalz and the firm Baier Digitaldruck.

“My intuition has always been that history can best be understood when communicated through individuals’ stories which awaken intellectual curiosity and personal empathy,” Less said. He hopes that after their Shanghai excursion, the students will “feel a deeper connection to their history and responsibilities as German citizens, as complicated and difficult as that may be.”

SHANGHAI’S HONGKOU, PAST AND PRESENT

When asked whether his father formed any personal connections with the Shanghai locals while living in the Hongkou ghetto, Less suggested his father was rather introverted. Yet, “without empathizing with the situation of the coolies, the rickshaw pullers, and other poor people who lived on the streets, my father could never have depicted them in his drawings as he did,” Less said.

Meanwhile, he said his aunt Vera mingled more with the locals and for a while was courted by a young Chinese man who serenaded her on the flute “since they otherwise shared no common language.”

Blum for his part spoke about the refugees’ situation and life in the Hongkou ghetto, which had been established by the Japanese occupiers and where the Jews lived packed together with the local Chinese. He said many of the refugees were very well educated, but virtually penniless, and depended financially on rich Jewish merchants and Jewish aid organizations. Nevertheless, culture in the form of newspapers and coffee houses flourished in the ghetto, which was nicknamed “Little Vienna,” Blum said.

The field trip by Blum, Less, the students and their teacher to present-day Hongkou had a profound impact on Less. “I was and continue to be shocked and deeply moved by what I saw. Despite having heard my father’s and other relatives’ descriptions and being familiar with my father’s graphic representations, actually going to Hongkou and personally witnessing at close range the conditions in which many of the district’s residents live — especially when contrasted with the examples of ultra-modern architecture I saw in Pudong — had a visceral impact on me,” he said.

“Many people in Hongkou apparently have very limited means and live in very trying circumstances.”

Still, Blum said they were hospitably and cordially received by the residents of Hongkou. “The current residents mostly welcomed us with benevolent curiosity and gave us an insight into the living conditions of the grassroots,” Blum said. “Their openness was an impressive experience for all involved.”

The Hongkou ghetto was liberated in September 1945. In 1947, the Less family received their visas for the United States. Like the majority of Shanghai’s Jewish refugees, they returned to the West in the hopes of starting over and being reunited with family members they had been separated from in the Holocaust.

Although over 70 years have passed, Less believes the “Last Refuge” exhibit is especially timely as a record number of people are being displaced today.

“The UN (United Nations) Refugee Agency has registered over 70 million refugees, asylum-seekers and internally displaced persons for the past year. The human catastrophe involved is taking place in a politically charged atmosphere of increasingly aggressive nationalism and open racism in many countries throughout the world, including the USA and Germany, places of immediate personal concern to me,” Less said.

The historical tragedies of the twentieth century demonstrate where the current trend can lead, Less said. “The exhibit, in revealing that peaceful co-existence is possible when fear, hatred, xenophobia and anti-Semitism are not the controlling sentiments — as they were not for the 100,000 Chinese in whose midst the Jewish refugees survived, after their confinement by the Japanese occupation authorities to a one-square-mile (2.6-square-kilometer) area of Shanghai known as the Hongkew (Hongkou) Ghetto, offers a ray of hope within the darkness of our own time.”  Enditem