An American acquaintance of mine who had rented a hutong house in Beijing’s Houhai lake area said hutongs were overrated, and it would get so cold in the winter you wouldn’t need to refrigerate your beer!

This autumn I also overheard a German tourist passing through my hutong neighborhood telling his travel companion that my neighborhood was “romantic,” yet he wouldn’t want to live here; and by way of comparison, the man mentioned the “Fachwerkhaeuser,” or half-timbered houses, in the German city of Tuebingen.

Having lived for several years in a ground-floor apartment of a Baroque building in Heidelberg’s historic district, I can agree that living in “old” buildings, no matter where, is not for everyone. It takes a certain kind of person to weather and appreciate the experience. I consider myself fortunate to still be able to experience the “hutong culture” as hutong houses are being torn down at an alarming rate to make way for modern high-rises. In fifty years, I suspect, there will be less opportunities to live and breathe Beijing history in a hutong house. 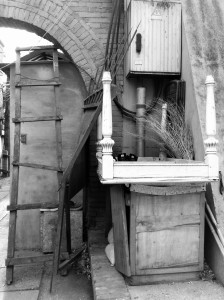 But my experience so far has been worth the minor annoyances. It has been like living in a historic B&B every day squat in the heart of Beijing and only meters away from the Imperial Academy, where China’s top scholars studied the classics for centuries, and only several subway stops away from the Forbidden City, secluded home to the Chinese emperors. I have loved (almost) every minute and every second of my stay in my high-maintenance hutong house.

Yes, spending the winter in a hutong house does have its challenges. Hutong houses may be a bit colder on average than your standard apartments as they are warmed by electric heaters as opposed to the government-subsidized heat you would get in Beijing’s high-rises. Moreover, you have to pay for the electricity yourself. Yet it has been toasty in my hutong house thanks in part to the second heater my landlord had installed in my bedroom during my tenancy. When it was being carted into my apartment, he proudly pointed out it was a “Swedish” brand (Electrolux). 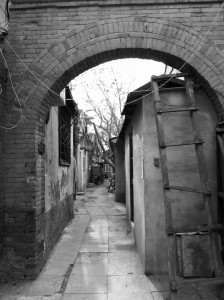 I also have one electric heater each in my kitchen and living room, but only turn on the heaters in my bedroom to conserve electricity. In the bathroom, there is a special kind of light that supplies warmth, which makes you feel like a reptile in a terrarium when you take a shower. Next to the heaters, the southern exposure and the thick walls of my hutong house also make for warmth.

Next to making or conserving heat a challenge I faced as we slipped, or rather, leaped from autumn into winter was the tidal wave of leaves that broke over my little courtyard. Thanksgiving found me sweeping, or “raking,” the leaves that were littering my courtyard. I had to stuff the leaves into tiny garbage bags and put them into the communal trash bins in my hutong. I never thought I would come to China to “rake” leaves; this was an activity I associated with America!

The leaves came from a poplar tree that had given me a lot of pleasure with its rustling leaves in the summer. “等风来” (“Wait until the wind comes”), a coworker had warned me, and sure enough, when strong winds came, the poplar tree next to my hutong house dumped its bounty into my little courtyard. 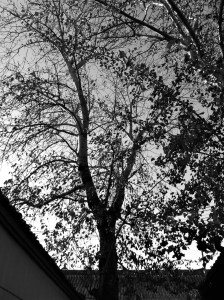 Still, I admired the beauty of “my” poplar tree and mentioned it in a Wechat post in October: “亲爱的秋天，你慢慢来吧，给北京的杨树穿金色的衣服” (“Dear autumn, come slowly, clothe Beijing’s poplar trees in gold”). Yet the transition of seasons doesn’t occur gradually in Beijing; it’s a sudden transition that leaves little time for poetic musings. The leaves didn’t even have time to turn gold, they were just yanked from their trees! 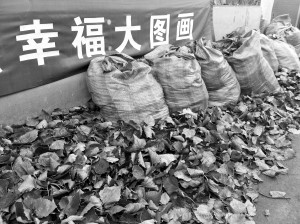 Finally, Beijing’s “Airpocalypse” has made headlines recently. The pollution in Beijing is worse in winter because of coal burning; whereas Americans only use coal briquettes for an occasional summer cookout, some Beijingers use coal briquettes to heat their homes. Factories also contribute to the pollution. As a result of Beijing’s “airpocalypse,” schools are occasionally closed and Beijing residents are urged to stay indoors. On smoggy days, I don’t open the windows to let in fresh air and keep my time outside to a minimum, mouth covered by a mask (I have amassed quite an impressive collection of face masks, by the way.) I even helped a coworker who had a racking cough because of the pollution order an expensive air purifier from Amazon in the United States.

Ah, the Beijing winter. The neighborhood is a lot more silent, and the silence is only occasionally interrupted by the wailing of a child. It is a church-like silence at times, with no chickens clucking or children playing. There are fewer cat sightings in my “hutong ‘hood” as well. The lizards are gone, so are the chickens – all hibernating, indoors or eaten. 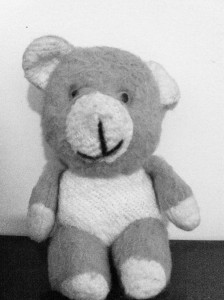 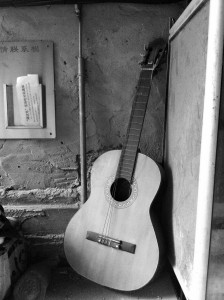 At least there are no heavy rains here in winter. The flash floods in summer caused a Titanic-like flood in my kitchen as the drainage in my yard is poor and the kitchen door is flimsy. Yes, that was a Waterloo.

Hutong houses stand out in their stark naked beauty in winter. Winter is the time to admire the designs on the roof tiles, for example the jade rabbit from Chinese mythology that is supposed to be pounding the elixir of immortality but looks as if it is actually mopping the floor. I discovered another tile that depicted a rider bearing down on his horse and a series of tiles that featured a traditional Chinese knot which I jokingly referred to as “China Unicom” tiles as China’s mobile service provider used that very same design as a logo. 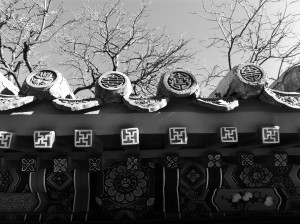 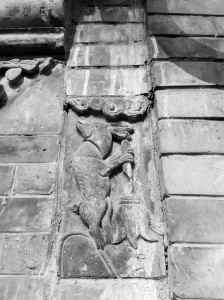 Winter is also the time to contemplate the inner beauty of hutong houses, the plaster flaking off the moist walls and dusty, occasionally sweet-smelling museum-like pieces that may come with your tenancy. These objects are fossils; go to visit Beijing’s 故居, or former residences of famous people, and you will see many of those objects.

A Chinese friend asked me why I was so attracted to these details in Beijing symbolizing traditional Chinese culture that local people might not even care much about. I am not sure. Perhaps if you spend an extended period of time in what, relatively speaking, could be considered a cultural vacuum (I spent two years in Houston, Texas), you clap your hands in delight at every flowerpot in such a culturally rich city as Beijing. What’s more, I simply think many everyday objects here are beautiful. They have their own spirit. Is it the Beijing spirit? I don’t know.

The beauty I encounter here on a daily basis is also a reminder of how timeless yet transient things are. 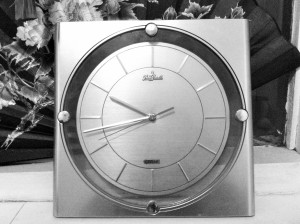 In some ways, Beijing is like Rome – an “eternal city,” yet in some ways it isn’t, with environmental factors and human activities chipping away at its “relics.” Here today, gone tomorrow. Beijing’s hutongs are a good case in point. 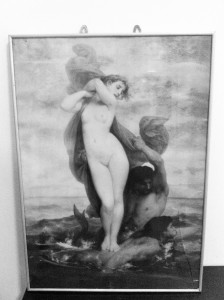 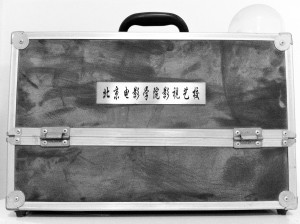 I invite you to take a look at some photos of my hutong house and neighborhood here and discover that beauty for yourself. 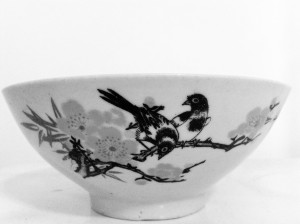 One thought on “The Hutong House in Winter”