Washington, D.C. – Washington has become the residence of its latest goodwill ambassador from China – only this “ambassador” looks and acts differently from what one may expect. She is completely covered in white and black fur and prefers to snack on bamboo all day long instead of actively engaging in any PR.

Her name is Bao Bao.

Bao Bao, whose name means “treasure” in Chinese, was born on Aug. 23, 2013 to the National Zoo’s giant pandas Mei Xiang and Tian Tian. She made her highly anticipated first public appearance on Jan. 18, 2014. Washington’s “debutante” graced the headlines of Washington’s newspapers upon this occasion. Bao Bao was, and to a certain extent remains, big news. 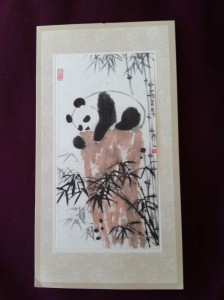 The charm of pandas

Indeed, pandas are quite popular in the United States. Just think of the American animated film Kung Fu Panda, the U.S. restaurant chain Panda Express, which uses the animal in its name and logo, and the Chinese show Panda! which debuted in Las Vegas recently and caters to American audiences.

So what’s the hype about this fuzz ball that looks like a bit like a super-sized skunk minus scent glands? For sure, this Chinese teddy bear may appear cuddly and cute, but doesn’t it just sit around lazily, chewing on bamboo stalks or snoozing most of the time?

In fact, there is more to pandas than that. From a political point of view, pandas can be regarded as passive “goodwill ambassadors” between China and other countries, in particular the United States.

China has used giant pandas, which are endemic to that country and regarded as a “national treasure,” as highly-prized diplomatic gifts to other countries. This custom, called “panda diplomacy,” dates back to the Tang Dynasty, when Empress Wu Zetian gave the Japanese emperor a pair of pandas.

Most memorable to Americans perhaps was the Chinese government’s gift of two pandas, Ling Ling and Hsing Hsing, to the United States in 1972 after President Richard Nixon’s historic visit to China. First Lady Pat Nixon donated the panda pair to the National Zoo upon their arrival. They were immensely popular, and China’s generous gesture was regarded as a great diplomatic success for China, which was eager to establish official relations with the United States at that time.

From a scientific point of view, giant pandas, an endangered species native to south central China, are interesting for various reasons. For example, they were originally regarded as marsupials, but are actually true bears. Furthermore, though their diet is mainly bamboo, they are actually carnivores. And the giant panda’s paw has an extra “thumb” that helps it to hold bamboo while eating.

Asian Fortune had the unique pleasure of talking to the National Zoo’s giant panda keeper Nicole MacCorkle, who helped demystify the animal by providing some more information on pandas in general and Bao Bao in particular.

MacCorkle has been at the Smithsonian’s National Zoo since 1998 and is now in her 13th year working with Bao Bao’s parents, Mei Xiang and Tian Tian. She credits having landed her role as giant panda keeper in part to a stroke of good fortune. “I got very lucky, and was at the right place at the right time,” she said.

The giant panda keeper said that Bao Bao had over 18,000 visitors the first weekend she was on public display. MacCorkle also revealed how the National Zoo carefully prepared for Bao Bao’s exciting red-letter day.

“We had closed the Panda House and surrounding areas prior to Bao Bao’s birth. We reopened the building, a little at a time, prior to Bao Bao’s debut,” MacCorkle recalled. “We started first with staff previews, and then expanded to volunteers, and then FONZ [Friends of the National Zoo] members. That way Bao Bao was acclimated to the extra noise and activity around her. Mei Xiang [Bao Bao’s mother] is used to the crowds, and doesn’t react, so her calm demeanor helped Bao Bao reach this milestone.”

When asked how Bao Bao’s debut compared to the National Zoo’s former giant panda superstar’s, Tai Shan, MacCorkle seemed satisfied with the results. “We had a great initial turnout, and continue to have lots of people trying to catch a glimpse of Bao Bao, and we aren’t doing ticketed viewing like we did with Tai Shan. Things are a bit different, but our Guest Services staff is terrific in keeping the crowds happy.”

She also conceded that as far as she could ascertain at this point, Bao Bao and her brother Tai Shan have very different personalities. Despite her popularity, Bao Bao does not appear to be basking in the glow of fame. “Bao Bao and her older brother, Tai Shan, although full siblings, are proving to have very different personalities. Tai Shan was very confident and relaxed, like Tian Tian [Tai Shan and Bao Bao’s father]. Bao Bao is a little more cautious, much like Mei Xiang.”

Asian Fortune also asked MacCorkle about the agreement with China regarding the giant pandas and Bao Bao’s fate once she is grown up. “Our pandas are on loan from China,” MacCorkle said. “The adults, Mei Xiang and Tian Tian, are here until 2015. At that point, they will either return to China, or we will re-negotiate our agreement, as we did when their first loan agreement expired in 2010. Bao Bao will move to China when she is four years old, per our agreement. Tai Shan moved to China in 2010. Although our original agreement stated that any cubs would go to China at age two, we were able to negotiate to keep Tai Shan here for two more years,” she said, adding that giant pandas are not sexually mature until between the ages of four and seven.

The giant panda keeper admitted that breeding pandas in captivity is challenging. “Females are only fertile for 1-2 days each year,” she said. “In the wild, they would often have the opportunity to breed with more than one male during that time. In captivity in the United States, we house pairs of pandas, so they only have a few hours to attempt to breed. If no successful breeding behaviors are observed, we must switch our efforts to an artificial insemination, while working against the fertility window. In 2013, we gave Tian Tian and Mei Xiang only a few hours together. At that point, our veterinarians and reproductive scientists, as well as our Chinese colleague, Dr. Tang, prepared to perform an artificial insemination.”

MacCorkle also answered the questions any panda fan would be dying to ask – namely, whether zoo staff are allowed to pet the pandas. “While we do still go in the same enclosure with Bao Bao, we do not pet her. We do not pet the adults either. We handle Bao Bao for management purposes only, moving her from place to place by carrying her, much like her mom would. At this point, she is fully mobile on her own, and is beginning to follow a target and voice commands, so we are becoming increasingly hands off with her.”

Furthermore, she suggested that the feel of panda fur may be a disappointing experience for those who are expecting the animal’s coat to be soft and light to the touch. In fact, panda fur feels nothing like cashmere. “Giant pandas have oily, wooly coats, which help to insulate them against the cold, often wet climate of their native habitat,” the giant panda keeper said.

Science and politics aside, this animal also touches us on a more basic, primeval level when one considers that occasionally, its behavior is not too different from that of humans.

During this season’s cold winter snows and even as Washington heads into spring, Bao Bao has been warming the hearts of D.C. residents and visitors, especially when she interacts with her mother.

Nancy Frey, a D.C. resident, likes to watch the National Zoo’s Panda Cam, which allows viewers to follow the pandas’ actions live from the comfort of their homes.

“As an avid fan of the Panda Cam, I enjoy seeing the cub grow, the mother’s attentive care and concern for the cub and the interaction between them,” she said.

Sakiko Ishihara, a Japanese resident in the D.C. metro area, took her two daughters to visit Bao Bao in January. She was fortunate to witness a very special moment between Mei Xiang and her offspring Bao Bao: mama bear nursing her cub.

“We were lucky because the mom panda (Mei Xiang) had just finished eating herself, and she went over to the sleeping baby (Bao Bao) and started waking her by moving her around with her nose. The mom flipped herself over so Bao Bao could climb on her and start drinking milk,” Ishihara told Asian Fortune. “Totally felt like this mommy panda had strong maternal instincts and that Bao Bao was in good hands.” (Or paws.)

Ishihara admitted that although she was not an avid panda fan, she was touched by the experience. So touched, in fact, that she succumbed to the temptation of buying three baby panda stuffed animals upon leaving the zoo.

Without a doubt, Washington will continue to enjoy its temporary “treasure” Bao Bao until she is issued a single trip ticket to her home country, China, when she is four years old. But fortunately, there is still some time left to visit the National Zoo before Bao Bao bows out.