During the past quarter of a century Houston’s Chinese population exploded, and the makeup of the Chinese in Houston reflected that in other parts of the United States: While many immigrants originally came from southern China, more and more are coming from mainland China and Southeast Asia.

Whereas traditionally, Chinese were concentrated in several areas of a U.S. city, Houston’s Chinese have lived and worked throughout the city. However, Houston does have two official Chinatowns, an old one and a new one.

Houston’s old Chinatown is the original Chinese settlement in Houston’s southeast, yet in 1983, Asian American entrepreneurs started moving their businesses to a six-mile area between Fondren and Highway 6 in southwest Houston, lured by the perennial siren call of cheap real estate prices.

It has been argued that the new Chinatown should be renamed “Asia Town” because of the various ethnic groups running shop there – next to Chinese from various parts of China, there are Koreans, Japanese, Malaysians and Thai, among others. Especially the Vietnamese population seems to be increasing.

The new Chinatown boasts many shopping malls, hundreds of restaurants (some of them fusion cuisine, and there is even a Little Sheep Hot Pot) and many mainstream banks. At least one of them, Wells Fargo, offers service in various Asian languages. The boulevard which is home to many banks has been dubbed Chinatown’s “Wall Street.”

Many signs feature both English and Chinese, so one truly has the feeling of being in “Little China.” Storefronts advertise that dentists, doctors, lawyers and even the pest control all offer their services in Chinese as well.

What is notable is that Houston’s new Chinatown has many “retail condos,” i.e. shopping centers in which spaces are owned, not rented, because as opposed to Americans, many East Asians prefer owning retail space.

It has been observed that Houston’s new Chinatown is very automobile-friendly with retailers from different ethnic backgrounds operating next door to each other, whereas in the older Chinatowns of New York City and San Francisco, which date back all the way to the nineteenth century and are more pedestrian-friendly, the populations are uniformly Chinese.

While browsing Houston’s new Chinatown, I heard a lot of Chinese, and I was delighted by the genuinely Chinese products you can buy – rice cookers, incense sticks, joss paper, mugs with China’s Four Beauties on them, lotus roots, tripe, fresh fish (pick your victims) and a large selection of moon cakes. Even the cashiers speak to you in Chinese, and the ads on the pin boards are in Chinese, too.

Superficially, Houston’s new Chinatown is in effect nothing more than a succession of American one- or two-storey strip malls which feature Asian products inside and ample parking outside. And granted, Houston’s Chinatown does not exude the history that the older U.S. Chinatowns do and is far less charming than some areas of other U.S. cities, such as New Orleans’ French Quarter or San Francisco’s Russian Hill.

Yet with a little bit of imagination, Houston’s new Chinatown can transport you back to China for an hour or two while you imbibe the sights, sounds and smells of the Far East, an oasis squat in the middle of a desert of tanning parlors, pit stop BBQs and crab shacks. To many Chinese and nostalgic China expats such as myself, Houston’s new Chinatown is without a doubt a sensual way to reconnect with roots and memories and a “home away from home.” 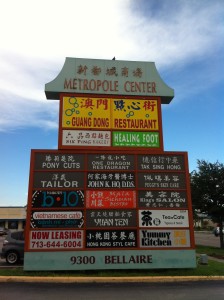 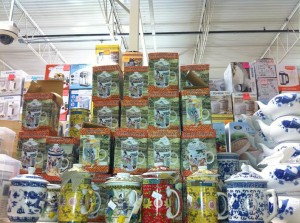