A tour of Beijing’s Babaoshan Cemetery given by Michael Crook on October 12, 2019

Our Babaoshan guided tour, Society for Anglo-Chinese Understanding (SACU) Beijing chapter’s first event, given by SACU member Michael Crook, a British expat in Beijing, was a big hit! Michael did the heavy lifting, and he was the perfect person to give the tour because he knew some of the foreign friends buried at Babaoshan personally. SACU member Tamara Treichel helped Michael organize the event in the form of suggestions and notes.

The foreigners interred at Babaoshan had helped China’s cause by being involved in the building of a new China that eventually led to the foundation of the People’s Republic in 1949 either by supporting the cause politically, giving favorable coverage to China during that era in history, or providing medical or some other form of assistance.

Michael’s mother Isabel Crook, 103, was in attendance as well and also knew some of the foreigners who had found a final resting place at Babaoshan. Isabel, a Canadian anthropologist who made a lot of contributions to the founding of New China in 1949, won the prestigious Friendship Medal awarded by the Chinese government in the Great Hall of the People on September 30 this year.

Isabel still has incredible stamina for her age. She occasionally requested to get up from her wheelchair and walk several steps during our tour and placed some white chrysanthemums that had been made available to us in front of the headstones. It was a delight for all to have her participate in this event. A Chinese woman called Fu Han, who had made a touching documentary about Isabel’s life called Isabel Crook: Childhood Memories from Bailuding,  also joined our tour, as did Israel Epstein’s widow, Huang Wanbi. 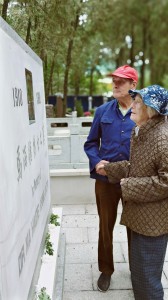 END_OF_DOCUMENT_TOKEN_TO_BE_REPLACED

BEIJING, Oct.  9  (Xinhua) –  To many past and present, the Chinese city of Shanghai has been a center for business and trade, marked by its forward-thinking residents, international flair and openness to the world.

To 20,000 European Jewish refugees during World War II, it was a last refuge from Nazi persecution and anti-Semitism that would ultimately claim the lives of millions. In 1940, John (formerly Hans) Less was one of the German Jewish refugees who as a teenager ultimately found a fortuitous last refuge in Shanghai after a three-week overland journey.

Self-portrait of John (Hans) Less. The watercolor is signed “Hans Less” and dated “Febr. 1940.” He was 16 years old at this point, half a year before he left Berlin for Shanghai. Private collection of Dr. Steven Less.

Today, his son Dr. Steven Less has devoted himself to preserving his father’s legacy and that of the other Jewish refugees with a project, comprised of an ongoing exhibit called “Last Refuge: Shanghai” in the Shanghai Jewish Refugees Museum which shows artifacts that belonged to Less’ father.

The project, rather unusually, also included a field trip of German high school students from the International Comprehensive School Heidelberg to Shanghai in September on which Less also went along to confront his father’s past. The students will report on their field trip experiences at a public event in Heidelberg, Germany in December. END_OF_DOCUMENT_TOKEN_TO_BE_REPLACED