I don’t know exactly when my love affair with qipaos, or cheongsams, started. I just know that when I saw Chinese actress Zhao Wei (Vicky Zhao) and her costars wearing qipaos in the Romance in the Rain or Moment in Peking TV series, which are set in Shanghai  and Beijing respectively in the 1930′s, I was smitten!

While the exact origin of the qipao is up for debate, with some saying it originated from a one-piece dress of Manchu origin in the Qing Dynasty, others posited it could be traced to other dynasties and had even sustained Western influences. The qipao became popularized in the 1930′s during the Republic of China, when it became a symbol of women’s liberation. After being out of fashion for several decades after that due to political turbulence, the qipao again became fashionable in the 1980′s after China’s reform and opening-up. 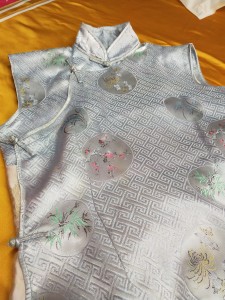 Whereas Chinese ladies today like to wear qipaos for special events, e.g. red ones for weddings, or even diplomatic functions, I wear them more frequently. END_OF_DOCUMENT_TOKEN_TO_BE_REPLACED