On my Chinese language learning journey, I have encountered several invaluable mentors ‒ my Chinese language teachers. When I first started learning Mandarin in my native United States, I took classes at an international language learning center near my home. My first teacher was Fiona, an immigrant from China’s Taiwan. Fiona made it her mission to fine-tune our ears to the phonetic pitfalls of Chinese. She had a beautiful soprano voice and taught us “The Chinese Phonetic Alphabet Song.” The sheet music to the song had a cartoon of a little horse clutching a microphone and singing karaoke.

At one point Fiona asked us to play jian dao, shi tou, bu (scissors, rock, paper). It was quite a spectacle: eight adults playing children’s games and singing. I felt as if I were one of the Von Trapp Family Singers in the Broadway hit The Sound of Music; instead of “do re mi” it was “bo po mo fo de te ne le.” Another one of Fiona’s teaching methods was having us read aloud vowels and diphthongs she had written on flash cards and stashed in plastic bags. We were then asked to swap the bags to practice different vowels.

When we practiced writing characters, Fiona only circled the beautiful characters in red ink to give face and boost our confidence. Perhaps the creative, playful American teaching style had worn off on her after many years in the United States. She was a wonderful teacher for those of us who were just starting out on our Chinese language learning journey.

After that semester was over and my classmates and I had graduated to the next level at the same learning institute, I met Julie, who was originally from Dalian. Julie was a strict, no-nonsense teacher who adhered to the textbook and learning by rote, and I dare say I did well under her tutelage because next to a carrot, I appreciate an occasional stick. As opposed to Fiona’s teaching us traditional characters, Julie taught us the simplified ones and would conduct frequent tests to monitor our progress. Everything was always under control, and our learning goals were fully met by semester end. 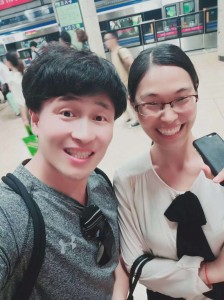