This story originally appeared in Beijing Review on April 19, 2018

Call me a calligraphy and Chinese painting junkie. While some other women spend their money on designer clothes and shoes, I spend it on a painting with avant-garde plum blossoms, or a faux Qi Baishi or a misty Yellow Mountain scene in autumn.

So when a Chinese calligraphy master I had met at an event invited me to his studio, I was excited. What a treat! My limited exposure to calligraphy in the past consisted of strolling through the National Art Museum of China’s exhibits or admiring elderly men “painting” characters on Beijing’s sidewalks with large brushes, water and a few flicks of the wrist.

Calligraphy master and painter Wang Xing is an internationally renowned artist who has won first prizes for his calligraphy, is involved in many associations promoting calligraphy and has had articles written about him. He told me that in China, calligraphy is sometimes used for certain brands, sort of like a logo, and I was amazed to learn the calligraphy on the “Thirteen Spices Powder” (十三香) packaging is his. 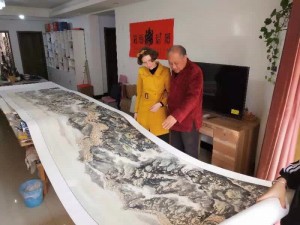 END_OF_DOCUMENT_TOKEN_TO_BE_REPLACED

This story originally appeared in Beijing Review on March 29, 2018

This winter I had the pleasure of being invited to be a judge at a youth winter camp activities talent show.

I was part of a judging panel that had four members, and I was the only foreigner. We had to give up to 50 points for each performer, for about 150 children of middle school age, in two sessions, one in the morning, the other in the afternoon.

The little performers from different cities in China ‒ Ningbo, Wuxi, Shanghai, Beijing, Tianjin ‒ had a great stage image and were completely unfazed by foreigners (as opposed to some Chinese children I had met in the countryside) because they already had some interactions with foreigners, such as English teachers, in their hometowns, I was told. 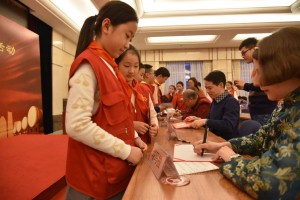 The children’s performance consisted of various acts consisting of traditional Chinese and international elements. For example, reciting poems (wo jiao’ ao wo shi zhongguoren) ‒ I’m proud to be Chinese ‒ which included references to historian Sima Qian and Confucius was especially popular and recited four times, perhaps indicative of China’s renewed national pride. There were also Mongolian and Latin American dances as well as a small boy I nicknamed “Tiny Tim”  because he was the smallest of the group, rapping in an oversized sweater and sneakers. Some children sang a cappella or with background music KTV style, e.g. to Avril Lavigne’s “Innocence.” If the tune was familiar, the children would croon along.

One boy gave a short PPT presentation about his science projects and engineering aspirations. Others introduced their calligraphy or art works. Every child got two minutes to perform, and if the two minutes were up, one of the judges said firmly, “shijian daole” (time’s up). Most kids with an exception of two or so remembered their lines and made few if any obvious mistakes. END_OF_DOCUMENT_TOKEN_TO_BE_REPLACED