This story originally appeared in the Beijing Review, Jan. 25, 2018

It was in Beijing that I was bitten by the acting bug, with my more serious, intellectual look inviting offers to play researchers and scientists and even a doctor in a commercial for a weight-loss product. I love acting gigs because they are a wonderful opportunity to engage in creative projects, practice one’s Chinese and make new friends.

My most recent gig involved playing a “middle-aged” woman for a TV series starring the famous Chinese actor and teen idol called Li Yifeng (李易峰). (Note: It appears that in China, anyone over 30 is already considered “middle-aged.”) When I auditioned for the role, I had to play a woman who was arguing with her lawyer (who would be played by Li Yifeng) about her son’s death sentence. After channeling all my anger over my father’s passing and my divorce into the role, the agent asked me, “Do you have a white T-shirt?” “Do you mean I got the role?” I answered.

I would visit the film set twice for this role. The first time I came, they suddenly changed my role into that of a middle-aged New Yorker woman trying to trick a lawyer (Li Yifeng) into believing she had recognized a lost dog, a Golden Retriever called “Cookie,” in order to claim money. Versed in human nature, the lawyer exposes her and she leaves angrily without claiming the money. I had to prepare the lines ad hoc in both English and Chinese, which wasn’t that hard as I only had several lines of dialogue. 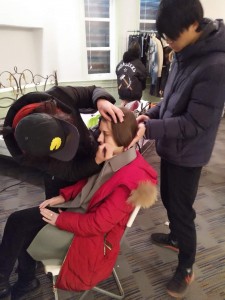 Being transformed into a middle-aged New Yorker woman

END_OF_DOCUMENT_TOKEN_TO_BE_REPLACED

BEIJING, Jan. 17  (Xinhua) – Few people may be able to get excited over the guts of a fish, sores on human skin, or a half-eaten peach. But Mary A. Johnson, an American artist and lecturer at Beijing’s Central Academy of Fine Arts (CAFA), is fascinated by such things and embraces them in her works.

In Johnson’s creations, food clearly plays a prominent role, as well as the tension between the visually seductive and repulsive, transience and decay. 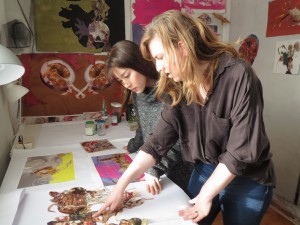 Mary Johnson and her intern Luo Jingfan in the studio