A shortened version of this story was published as a Xinhua feature, Oct. 1, 2017

“Study the Analects if you want to understand China better,” a close Chinese friend once advised me. So before moving to China, I bought a copy of Arthur Waley’s translation of the Analects, and I must say my friend’s advice was among the best I have ever received.

The longer I stay in China, the more I realize that this collection of ideas attributed to the Chinese philosopher and educator Confucius (551-479 B.C.) is a minefield of wisdom – ponder Confucius’ sayings, and you will be blown away by their profundity and enduring relevance.

Moreover, the more I interact with Chinese people, the more vestiges of Confucianism do I discover in today’s China. For example, when a Chinese coworker told me about doing everything at the proper time (e.g. allowing one’s children to do certain things only at a certain age), I interpreted it as an example of propriety, a key virtue espoused by Confucius.

Another example: When taking public transportation in Beijing, I encounter signs everywhere reminding passengers to give up their seats to those in need, such as the sick and elderly, and besides the subway cars and buses, some public places like banks and train stations also have designated seats for such persons. Obviously, benevolence, another Confucian virtue, is still very much encouraged in China.

My copy of Waley’s Analects as well as the several years that I have lived in China have provided me with a sort of introductory course to China’s venerated sage, or as we Americans would say, “Confucius 101,” about the man who has contributed greatly to the secular morality of contemporary Chinese society.

When Xinhua News Agency asked me to co-host two Livestream programs about Confucius’ life in Qufu, Shandong Province, the philosopher’s hometown, I was excited about what I considered an “immersion course” in Confucianism. I had traveled to Qufu earlier this year on a blitz tour of the “San Kong,” or three sites related to Confucius in Qufu – the Confucius Temple, the Residence of the Confucius Family and the Confucius Mausoleum – as well as the Temple of Yanzi, Confucius’ beloved and exceptionally bright disciple who had died young. Yanzi, also known as Yan Hui, had dreamed of an ideal society and was content with a rice bowl and a drinking gourd. 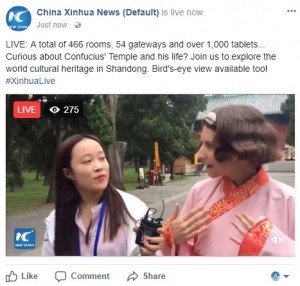 END_OF_DOCUMENT_TOKEN_TO_BE_REPLACED

I never imagined that this June I would land the role of one of China’s real-life “foreign friends” for a short film and sing, wrestle and ride on the grasslands of China’s Inner Mongolia. The VR film was for a local museum there and its title was Friends (老友谊). I have to smile when I think of the English title, which reminded me and also some younger Chinese who were involved in the project of the popular 1990′s American sitcom.

I had taken an interest in China’s film industry and somewhat on a whim, applied to an opening for two foreign actors, an American expat couple who “are going to visit their friend Gala in Inner Mongolia.” Despite my lack of acting experience, the casting director still showed interest in me after viewing my materials, and after some back and forth via an agent, a makeup and audition session, I was given the part and four days to prepare. I suspect it was my haircut, a bob, as well as a rough physical resemblance despite our large age difference of over two decades, that landed me the role of a sixty-plus-year-old Joan Hinton (Chinese name 寒春, Han Chun).

From various sources online, I learned that Joan Hinton (1921-2010) was born in the U.S. city of Chicago and was one of the few women nuclear physicists who participated in the Manhattan Project to build an atom bomb during World War II. Being a sort of daredevil, she snuck away on a motorcycle to witness the Trinity Test. Greatly disillusioned after bombs were actually dropped on Hiroshima and Nagasaki with a purpose to kill, Hinton followed her brother William Hinton, who would later author Fanshen: A Documentary of Revolution in a Chinese Village, to China in 1948. In China’s Yan’an, she married Erwin Engst (阳早, Yang Zao), a cattle expert. They had three children together.

Hinton became a devoted follower of Mao Zedong, and together with her husband endured a lot of hardship in China, at one point living in caves and only owning one set of underwear. During the McCarthy era of the 1950′s, she was depicted as a “furtive blonde in a trench coat” and more sensationally, as a Cold War “Mata Hari” who had passed on atomic secrets to China, which was prompted by her attendance at the Asia and Pacific Rim Peace Conference in 1952 in Beijing where she had denounced Hiroshima.

She denied the accusations, and was never charged with espionage. Instead, Hinton insisted that she used her science background to help design automated milking and pasteurizing machines as well as other farming equipment in China to help build a socialist economy. Despite the tragedies brought about by Mao’s reforms, she remained a loyal supporter, which earned her another barrage of criticism. After her husband’s death in 2003, she spent her remaining days on a farm near Beijing, taking care of her 200 cows.

I would discover from old footage dating back to about 1985 after which our VR film was to be modeled that Hinton’s character and mine appeared to be poles apart ‒ she came across as very natural, earthy, warm-hearted and peppy, whereas I am more reserved and quiet, and move more slowly. When she laughed, she showed her teeth, whereas I rarely laugh, and when I smile, I keep my lips closed. Also, she had a more athletic build ‒ after all, “atomic Joan” had at one point in her life qualified as an Olympic skier.

I prepared for the role after work at home by learning more about Hinton, singing aloud the lyrics for the banquet scene, and practicing the greeting and farewell scenes with a friend, with a mobile phone filming me to see how I looked like on camera. I was determined to give Inner Mongolia the best rendition of Hinton that I possibly could! END_OF_DOCUMENT_TOKEN_TO_BE_REPLACED