A beige mini-bus ground to a halt at the entrance of some hutongs near Beijing’s Lama Temple at dusk one evening last October, discharging a group of British passengers and a caravan of luggage. Exhausted after an arduous journey to China’s capital, the travelers were nevertheless cheerful and excited.

In some ways it was an average tour group, in some ways it wasn’t. The 14 travelers were part of the 50th anniversary trip to China organized by the Society for Anglo-Chinese Understanding (SACU), which would take them to Beijing, Xi’an and Shanghai. Some of them were visiting China for the first time.

As an increasing number of countries are embracing protectionism and isolationism, organizations such as SACU may have an even more important role to play in promoting cross-cultural understanding and communication. With that in mind, Xinhua recently spoke with Walter Fung and Chris Henson, who have done a lot of heavy-lifting for the organization that looks back at half a century of promoting friendship between China and Britain.

Fung is a soft-spoken British-born Chinese (or “BBC”) with a gentle demeanor who edits SACU’s quarterly magazine China Eye. SACU emerged from the Britain-China Friendship Association in 1965, he said, and was co-founded by the famous scientist and sinologist Joseph Needham.

SACU’s mission is to promote friendship and understanding between the peoples of Britain and China. It is a registered British charity without political ties and run by volunteers. As the only friendship society of its kind in the country, it promotes its mission through events, trips and publications such as a magazine and a newsletter.

Fung reflected on the society’s origins and its role as a rare channel to China at a time when the country was internationally isolated.

“Because of the ‘cold war’ at that time, very few people could actually go to China unless being part of a group or delegation. SACU had connections as a friendship association and was able to run tours to China for its members. People had to join SACU to be able to go. These tours were very successful until the late 1980s, when travel agents and tour operators were able to organize holidays to China,” he said. 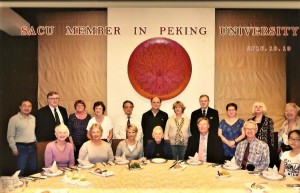