Back in his native Britain, Jack Jones was an aimless drifter, a “Jack of all trades” who had stints working on a fishing trawler, in a sugar beet factory, as a potato digger and a speedway rider. This all changed when he registered as a wartime conscientious objector, colloquially known as a “conshie,” in the Friends Ambulance Unit (FAU) set up by the Quakers, and after months of rigorous training,  landed in China in 1945.

Suddenly, Jack found himself with a mission and a passion as he hit the ground running, providing desperately needed medical relief mainly from the FAU transport depot in Chongqing, during a critical and turbulent time in China’s history.

Andrew Hicks chronicles the story of Jack’s experiences and those of other FAU volunteers from 1945 to 1951 in his recent book Jack Jones: A True Friend to China, an edited collection of Jack’s weekly “China Convoy” newsletter contributions that were distributed throughout the country. As Hicks pointed out, being a “conshie” was not an easy way out of military service, as the foreign volunteers who worked in China’s FAU were subjected to an “experience high on culture shock,” austere living conditions, ever-present danger, deadly diseases and sword-wielding bandits. 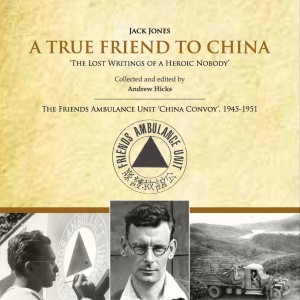 “The FAU distributed about 80 percent of all medical supplies in China during the war years and saved many lives over a ten-year period, a massive humanitarian achievement,” Hicks, both a lawyer and writer who comes from Britain, told Xinhua in a recent exclusive interview.

He said the wartime contributions of the Flying Tigers, whom FAU members would have encountered occasionally in and around Kunming whose air base was the entry point for arriving FAU members and medical supplies, are still remembered and celebrated in China.  Yet the same can’t be said about the FAU. “Sadly the FAU, a fine Anglo-American project, is as good as forgotten both in China and the West,” Hicks said, who sought to change this with his book. END_OF_DOCUMENT_TOKEN_TO_BE_REPLACED