This March, while Chinese President Xi Jinping was preparing his trip to Washington, D.C. for the Nuclear Security Summit and Will and Kate were packing for a week-long trip to India, I was already on the road ‒ a three-stop trip to Xi’an, Shaolin Monastery and Kaifeng. After a hiatus of several weeks, I set off for Luoyang just in time to catch its famous peonies in bloom in mid-April.

On both trips, I was traveling with a Chinese “frontman” (note: traveling with a Chinese person is more convenient, as s/he can help negotiate the best deals and makes you appear more approachable to the locals). March is a good time to travel in China because it is the off-peak season for tourists, the weather is pleasant and the blossoms are just starting to open. Luoyang would prove to be more expensive, with many domestic travelers coming to see the peonies in April.

A visit to Xian’s world-famous Terracotta Warriors definitely merited a Wechat post. “I have realized a dream … Now I can cross off another item on my bucket list!” I posted. Indeed, the Terracotta Warriors were a dream come true. There were three pits with the soldiers, which all had distinguishing features, and remnants of their chariots. Qin Dynasty Emperor Qin Shi Huang had commissioned these figures to be buried with him in 210–209 B.C. to protect the emperor in the afterlife. (Note: Qin Shi Huang desperately wanted to live forever and during his lifetime was obsessed with finding an elixir of immortality. The pits seemed to be an ersatz or an afterthought.) In one pit, I saw what appeared to be Chinese students taking notes ‒ archaeology in action! Amazing! 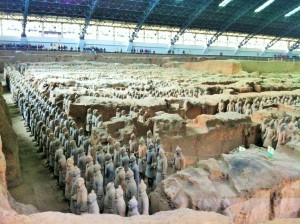 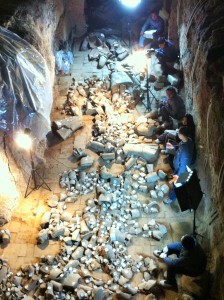 Archaeology students in one of the pits