This September, I had the good fortune to see Jackie Chan while visiting the set (actually, it was one of many sets, with filming also to take place in India and China’s Xinjiang region) of his upcoming movie, Kung Fu Yoga, an action film/comedy which is set to be released next year. Shooting took place in the penthouse of a high-end hotel in Beijing. The filming location needed to be kept a secret, so I was asked by the person who had invited me, an insider in the entertainment industry, not to disclose the exact location of the shooting.

The film set was well hidden behind the facade of a wellness center. At the entrance, there was a reception desk staffed with nurses. I asked my friend whether the nurses were fake or real (my logic was that they were there to deflect attention from what was going on in the rooms behind them). I was told the nurses were actually real — on standby in case someone got injured on the set. I was given an ID card similar to the ones Chan’s staff were wearing, and was permitted to set foot on the set. 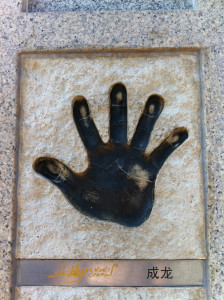 The penthouse was a duplex, and on the first floor there was living room furniture, Tang Dynasty-style woodcuts and books in shelves. There was catering on a dining room table for the staff with a kitchen area. The general atmosphere was like that of a casual Friday night party in a private home.

Upstairs were props used in different movies, e.g. a wooden Buddha and the scroll painting from Chan’s The Myth  (神话, 2005), a film that combines martial arts, adventure, fantasy and romance. The scroll painting features The Myth‘s Korean princess by the name of Ok-Soo who generally cuts an unhappy figure in the movie and only smiles for the person painting her portrait when she catches sight of the Qin-Dynasty Chinese general Meng Yi (played by Chan), whom she loves. Also, there were framed photos of Chan in different movies on a shelf. Chan’s two bicycles were strapped to the banisters of the stairs connecting the two stories of the duplex. 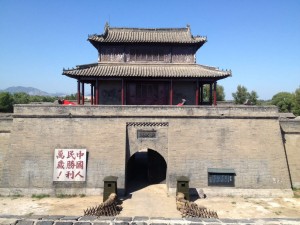 八一影视基地 film lot near Beijing, where Chinese war movies are made 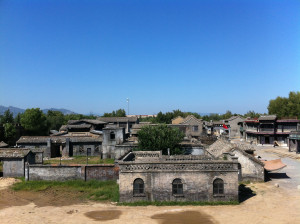 A step back in time: 八一影视基地 film lot

The shooting took place downstairs. There was equipment everywhere, film cameras, a big microphone, screens for the A and B cameras, dollies, straps and hoists used for stunts, etc.  Dozens of people were on the set; cameramen, stuntmen, makeup artists/assistants and 替身 (body doubles), who were either lounging or hovering about the set like butterflies. There was a Bollywood star on the set as well, who was a bit of a diva. She spoke British English and was wearing a white bathrobe. Yet there was no sign of Chan when I first arrived. 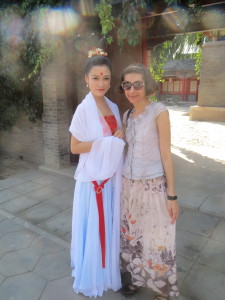